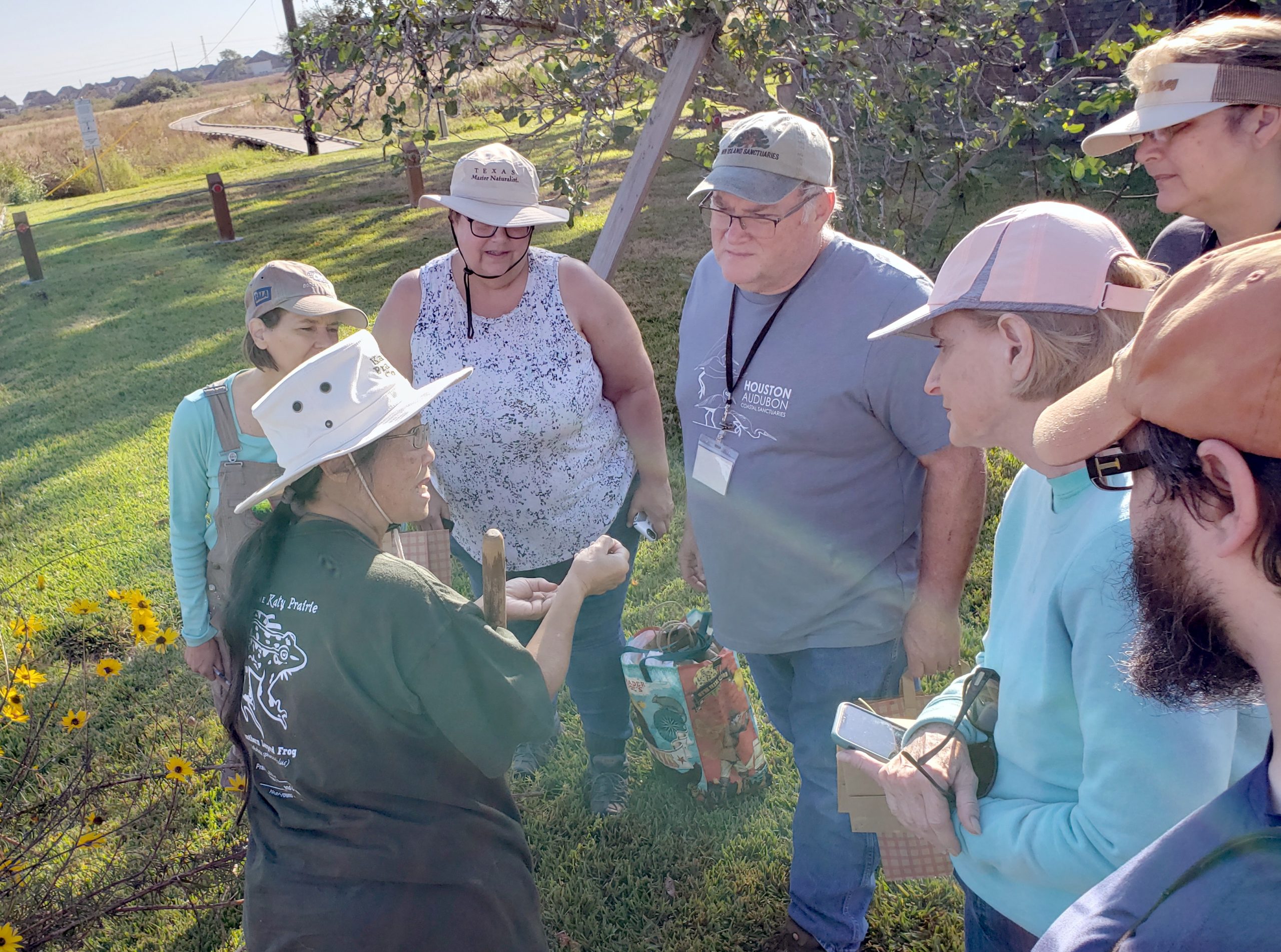 Each Wednesday in June we are sharing a feature about one of our marvelous members, in celebration of “Our Prairie People.” This is our third entry.

Nobody around here knows seeds like Lan Shen. Especially seeds that give life to prairie plants.

Though Lan was trained and spent her working career as a chemist, she is best known in the Houston area as a master prairie seed collector, sharing them with coastal grassland enthusiasts throughout the Galveston Bay region.

Lan grew up in Houston’s Montrose neighborhood and has always been interested in gardening. She acquired a love for wildflowers during hikes while living in the northeastern U.S. After returning to Houston in the early 2000s, she enrolled in the Texas Master Naturalist program, Gulf Coast Chapter. This, she said, was “a life-changer.” She learned about the complexity of prairies and their heritage from Dennis Jones. After the training, she volunteered on a project to dig up native prairie plants for transplanting to Attwater’s Prairie Chicken habitat near NASA. After that, she was hooked.

Lan credits Pat Merkord for introducing her to NPAT. Pat recruited her to be a part of the newly formed Houston Chapter, where Lan became an early leader and chapter president. Among her many contributions to NPAT, one of the greatest remains being on the core team that led the acquisition in 2013 of what is now Lawther – Deer Park Prairie (LDPP). It was one of the great natural landscape rescues in Houston history.

Word got out in 2011 about a grassland in Deer Park that the owner wanted to develop into housing. Upon evaluation, it was discovered to be one of the last remnant, never-plowed prairies in the Houston metro area. This 51-acre parcel had evolved in place since the last ice age ended about 13,000 years ago.

A team of deeply committed local conservationists, including Pat and Lan, Flo Hannah, Don Verser, Jaime Gonzalez, Jennifer Lorenz, and Houston philanthropist Terry Hershey rallied to spearhead negotiations with the landowner to raise the asking price in a very short time. After a huge media campaign, with the help of Lisa Gray at the Houston Chronicle, the effort paid off and the prairie was saved.

In 2013, Lan also learned about a part-time job at the Katy Prairie Conservancy (now the Coastal Prairie Conservancy or CPC) collecting and distributing prairie plant seeds. It was a natural fit. She continues in that role today. CPC and LDPP share these seeds with other land trusts, local school pocket prairies, private landowners, and other organizations interested in preserving this incredible natural resource.

Lan has no formal botany training — she learned by experience. She prefers it that way. What she loves most about prairies is the natural beauty of plants, especially forbs. Her favorite prairie grass is Gulf Muhly. She explained that one of the secrets to prairies is that “you have to look closely.” She also encourages people to visit prairies on a monthly basis, as you’ll see different colors each time.

Today Lan continues to support LDPP and the NPAT Houston chapter with seed collection and property maintenance, while also serving on NPAT’s statewide Board of Directors. She also remains active with CPC and the Native Plant Society of Texas, Houston Chapter. Beyond that, she can be found with her still sharp 94-year-old mother.

Thank you, Lan, for your lifelong dedication to conservation in Texas! We are grateful to you and all of our members. If you are not yet an NPAT member, learn more about it HERE.

Lan Shen is a FABULOUS teacher of many topics! She makes it look easy and by the end of my first seed saving, I learned so much! 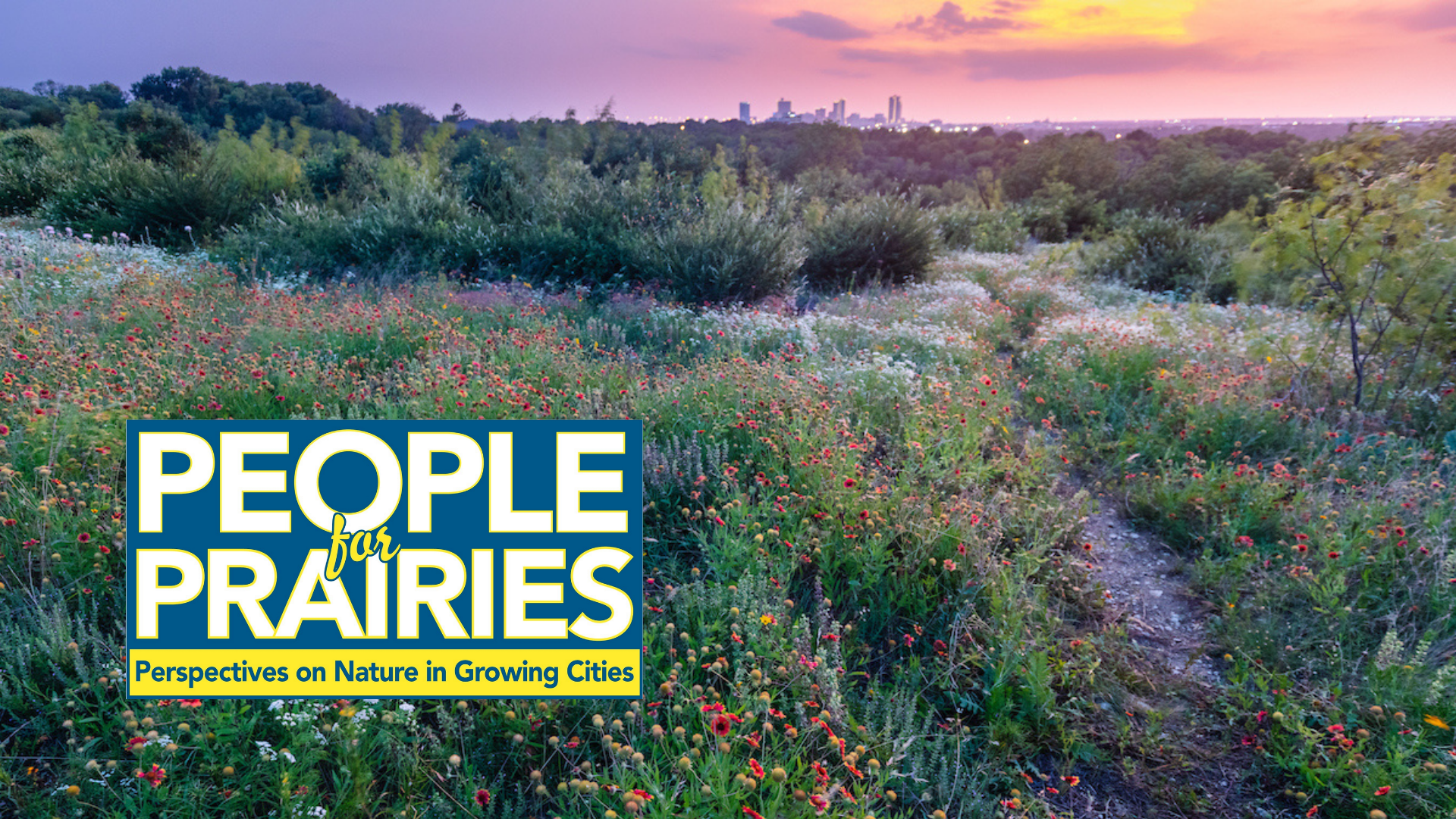 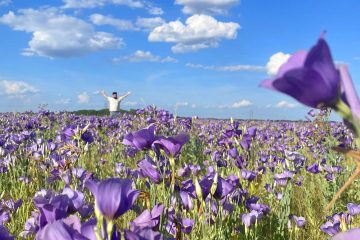 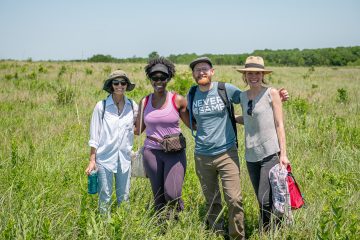 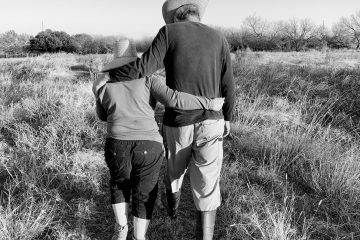 Each Wednesday in June we are sharing a story about some of our many marvelous members, in celebration of "Our Prairie People." This is our fourth entry, featuring Robert and Melinda Creech. Read more »